About the Jewish Lawyer

Jeremy Peter Green Eche is a branding attorney and the founder of JPG Legal and Communer. He is the attorney of record for over 3,000 U.S. trademark registrations. In 2019, JPG Legal was ranked the #16 law firm in the United States by number of federal trademark applications filed. Eche graduated from Northwestern University School of Law on a full scholarship. Thomson Reuters selected him as a Super Lawyers Rising Star in Intellectual Property for 2021.

Eche has been profiled on USA Today, CNBC, CNN Money, NPR's Morning Edition, WIRED, MSNBC, Forbes, the New York Daily News, HLN, CNN Politics, DCist, ABA Journal, Vox.com, CNET, Mic.com, NBC News, Refinery29, the Globe and Mail, and several other news sources. Before becoming a trademark attorney, he was known for owning ClintonKaine.com and hosting his comics there during the 2016 election, before selling the domain.

Eche is based in Brooklyn in New York City. He formerly served as in-house General Counsel for Teamsters Local 922 in Washington, DC. Eche is married to Stephanie Eche, an artist and creative consultant. He has moderate Tourette syndrome.

A Good Small Firm Attorney Is a Good Web Designer

If you’ve been poking around here, you’ve probably gathered that I designed and developed JPG Legal’s website myself, using HTML, CSS, javascript, Adobe Photoshop, and some powerful platforms and plugins. Though I did not incorporate it until a year later, I was 28 when I started JPG Legal as a solo practice in the late summer of 2016, right after I sold ClintonKaine.com for $15,000.

Segment about my “Hillary Potter” fan fiction and comics on HLN’s Morning Express. 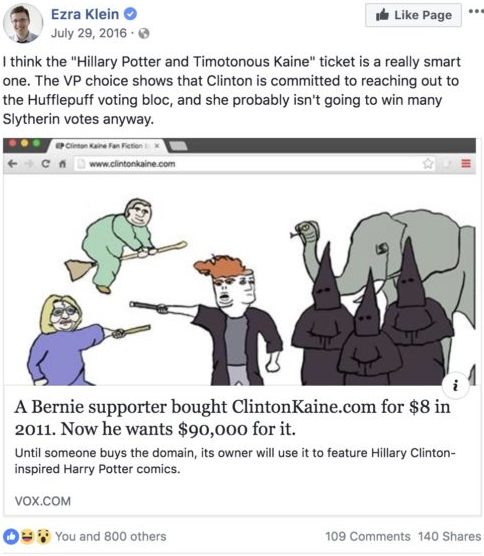 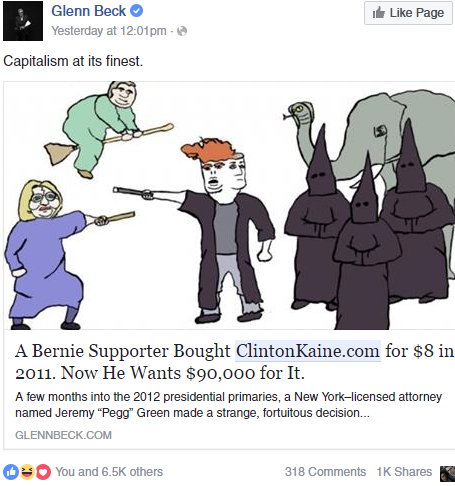 Before then I had been contracting as the Director of Strategic Initiatives (a title I made up and got approved) at a small Department of Defense office, where I had to deal with a bad work environment, large and unpredictable gaps in my employment, and my own moral qualms about being an active participant in the genocidal military-industrial complex of a global hegemony.

This windfall from my quirky domain name escapade was the spur I needed to finally get myself out of that situation and strike out on my own. 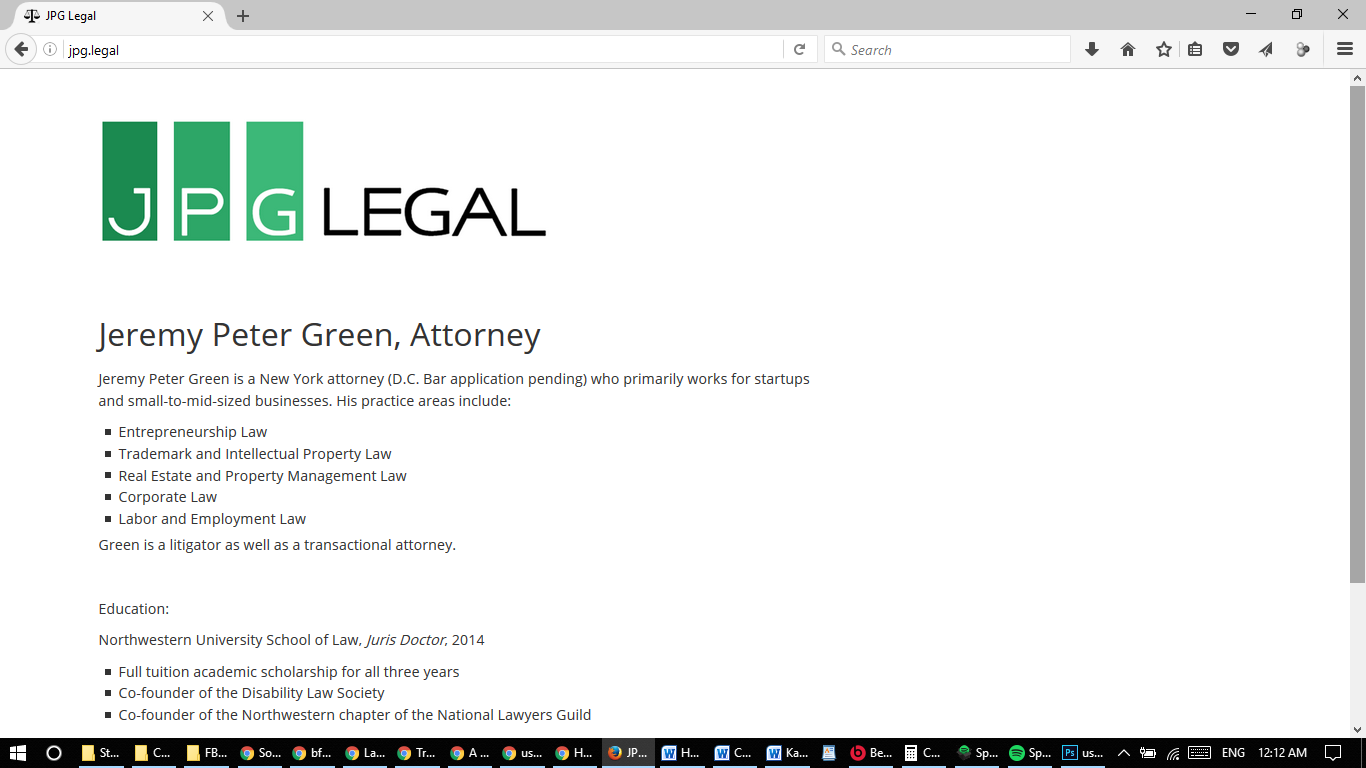 As you can see from the screenshot above, I had a barren website a year ago. I had just designed a logo for myself in Adobe Photoshop, and jpg.legal was simply an online listing for people who had heard about me through personal referrals and wanted to contact me. I was licensed in New York, living in Washington, D.C., and waiting for my D.C. Bar paperwork to come through, so I was uncomfortable with the idea of actively promoting myself online.

I had filed about eight trademark applications total and I was taking any work I could get, from LLC operating agreements to L-1 business visas to personal injury cases on contingency. I was also doing landlord-tenant work pro bono for anybody I met in D.C. whose landlords were trying to screw them. I worked out of a Cove co-working space that I paid $125 a month to use, a major expense for me at that time. 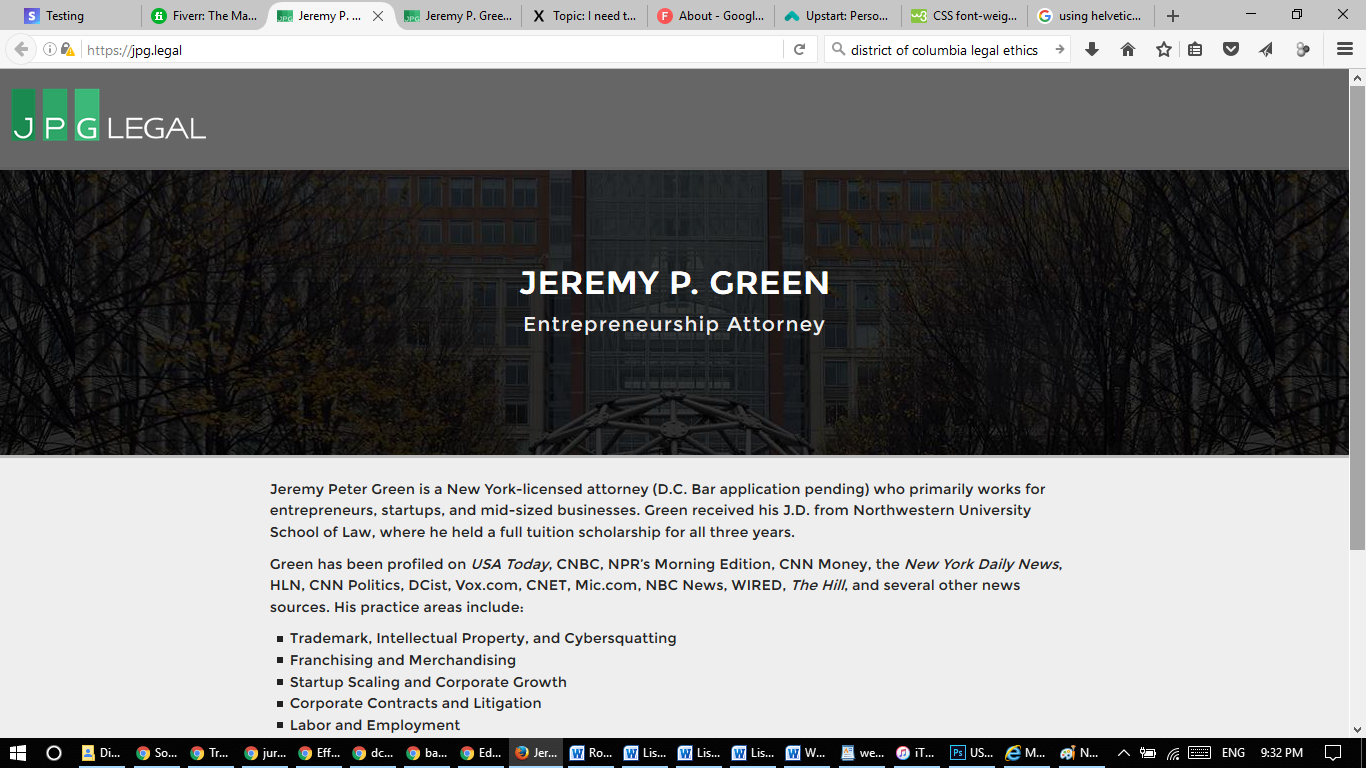 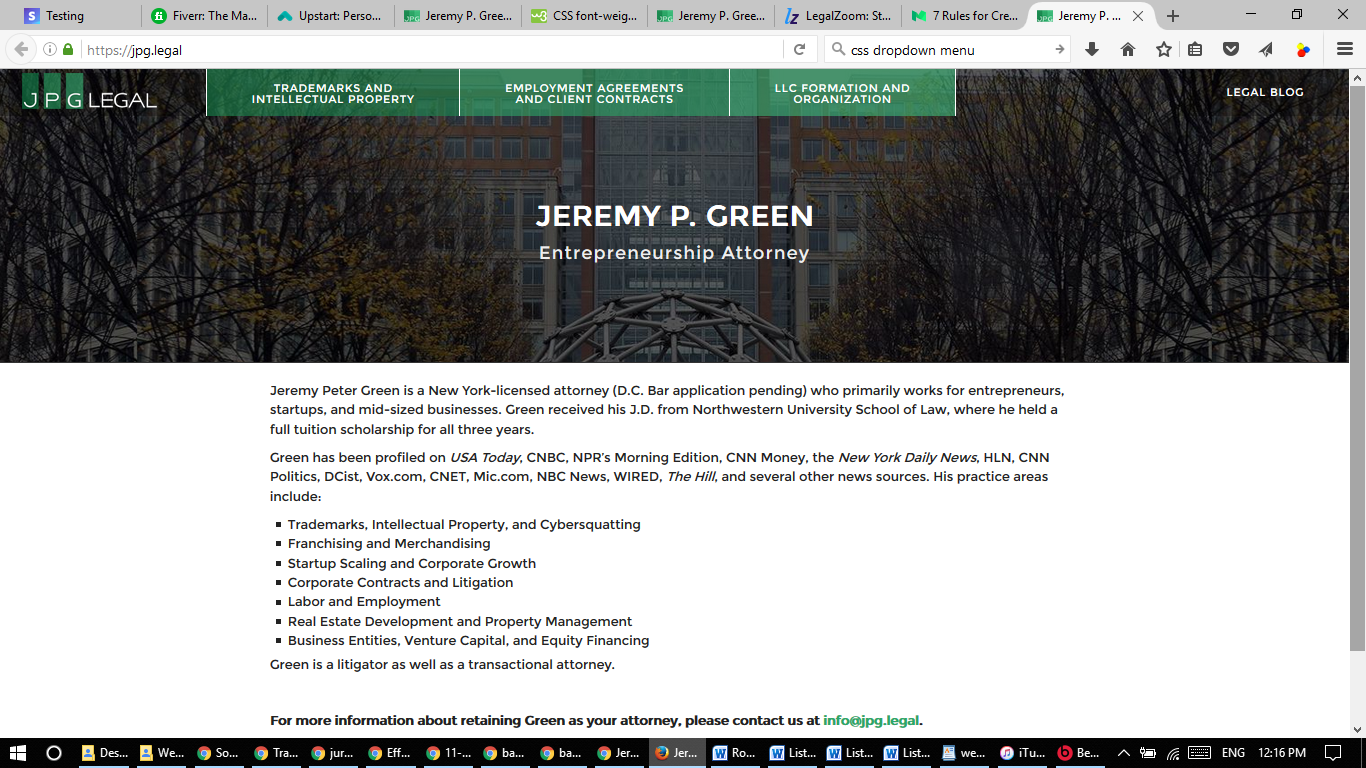 I had very few clients during those months and had a ton of down time, so I tried to make good use of that free time by building out my solo practice’s website. In the screenshots above, you can see a version of jpg.legal that has more of a resemblance to the current page, but still has a long way to go.

Around that time, I found that I enjoyed trademark work and I decided it would be a good niche for finding clients online, so I focused my website development on that area of law. The background picture in the screenshots above is a photograph of the U.S. Patent and Trademark Office I had grabbed from Flickr under a free-for-commercial-use license. 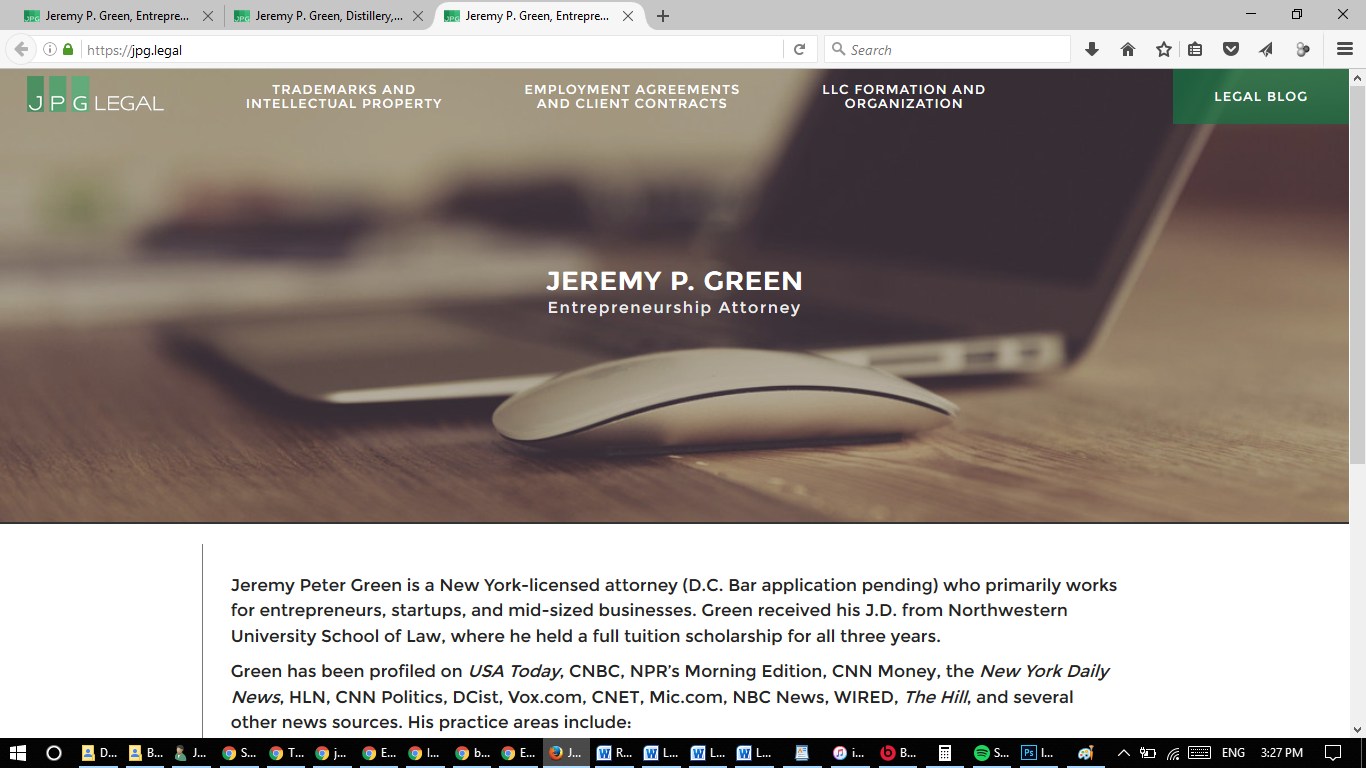 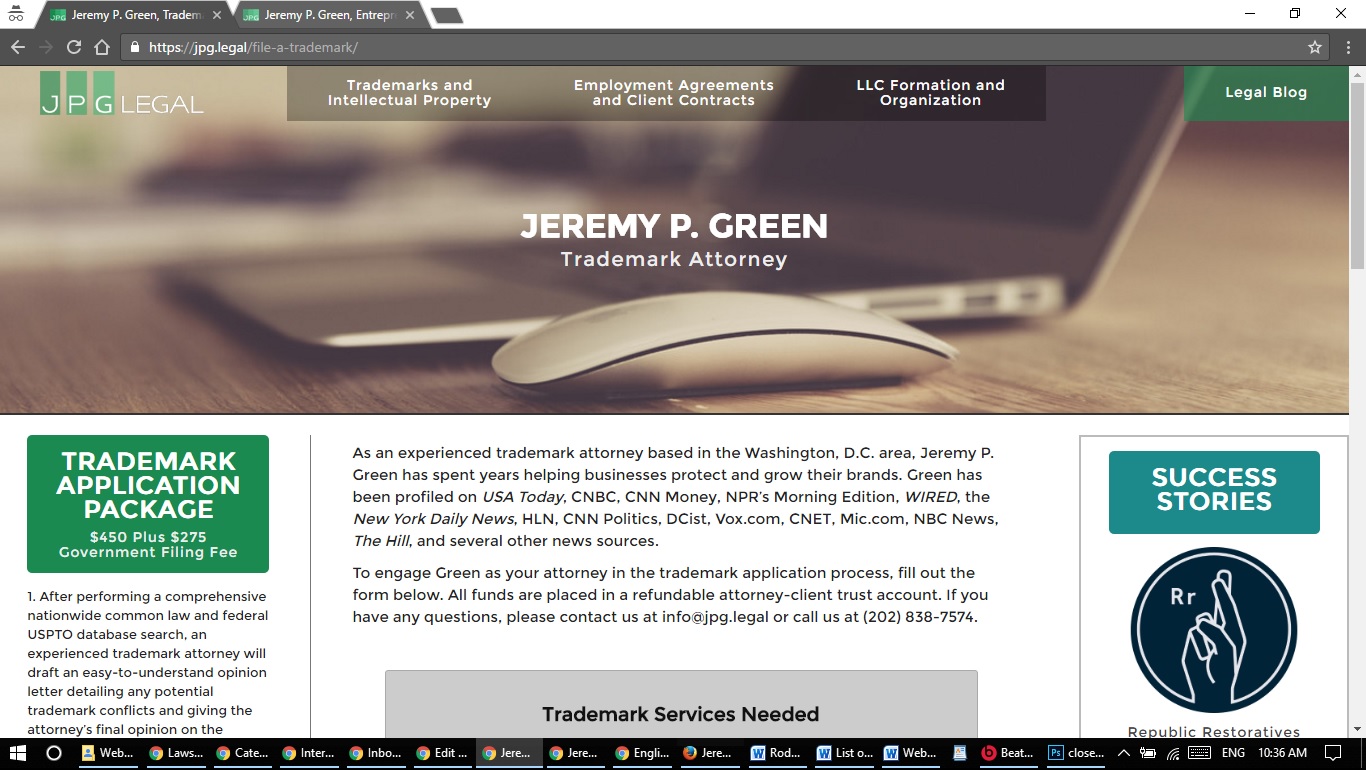 By late November, I had finally arrived at a website design that looked reasonably attractive and professional, and I had ditched the USPTO photograph for something that worked better for aesthetics. I had also made a separate landing page just for trademark clients, which contained an online form through which potential clients could hire me. At that point, I still hadn’t yet decided to offer a Filing-and-Monitoring-Only Package for entrepreneurs who either didn’t need or couldn’t afford a full search package. 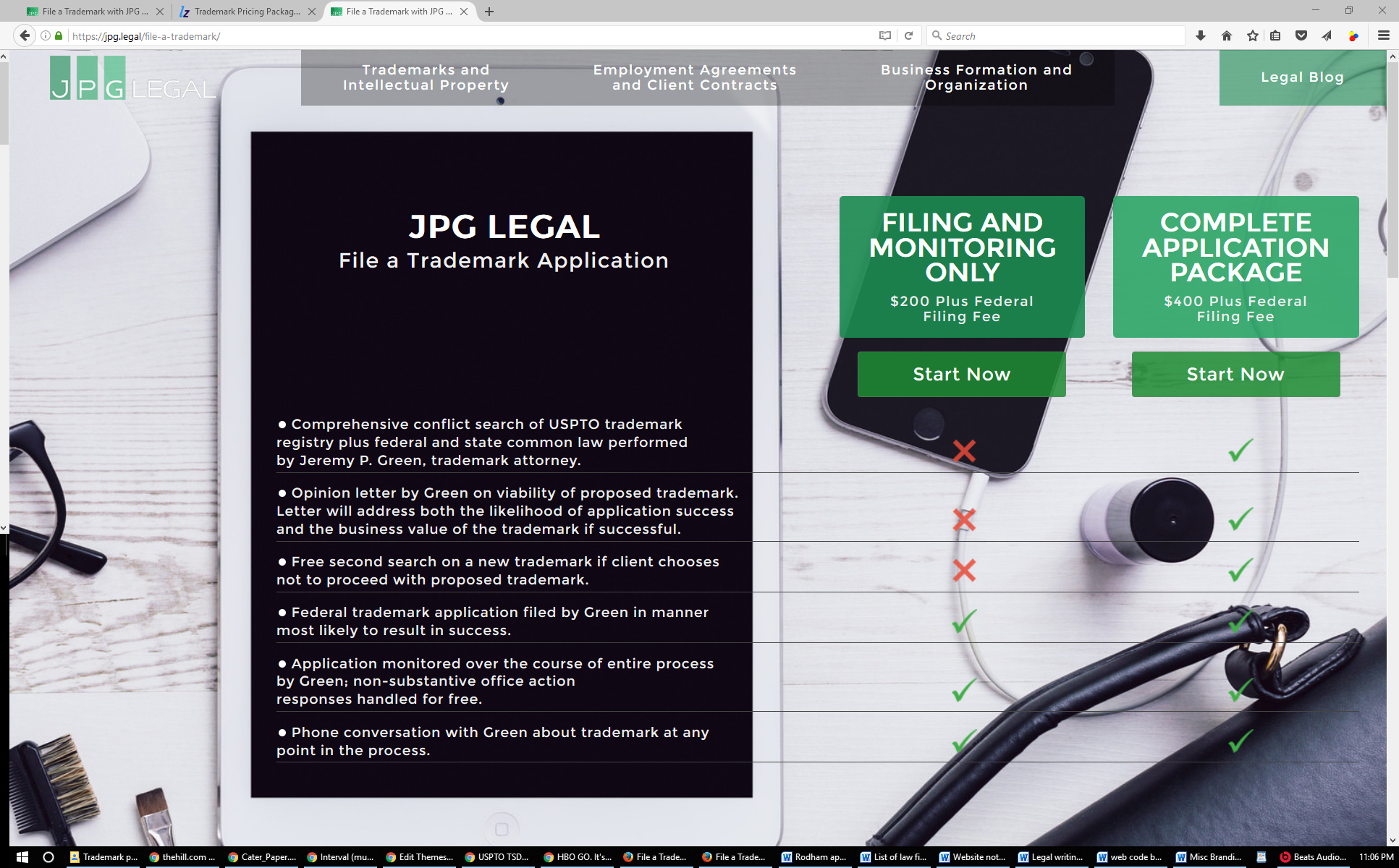 Now I was cooking! Above you see the background image I now currently use for my trademark landing page, minus the YOU HAVE NO EXCUSE™ overlay on the iPad. You can also see that I was charging $200 for my basic package at first. If you look really closely, you can see the trademark price sheet of LegalZoom (my biggest competitor) open in one of my browser’s tabs.

I had a pretty good landing page at this point. Unfortunately, I was almost broke (even after doing a few weeks of tedious legal document review temp work), and couldn’t afford to experiment with Google Ads, so I had no way to promote my new website. Around this time, Teamsters Local Union 922 came to me and offered me a job as their new taxi union attorney and lobbyist. I gratefully took the job (on the condition that they allow me to keep running my solo practice on the side), and after my first week there I convinced them to change my title from “Attorney” to “General Counsel” (to make me a more compelling lobbyist, of course). I also built a little website for them and gave all the staff members custom email addresses at Teamsters922.com. 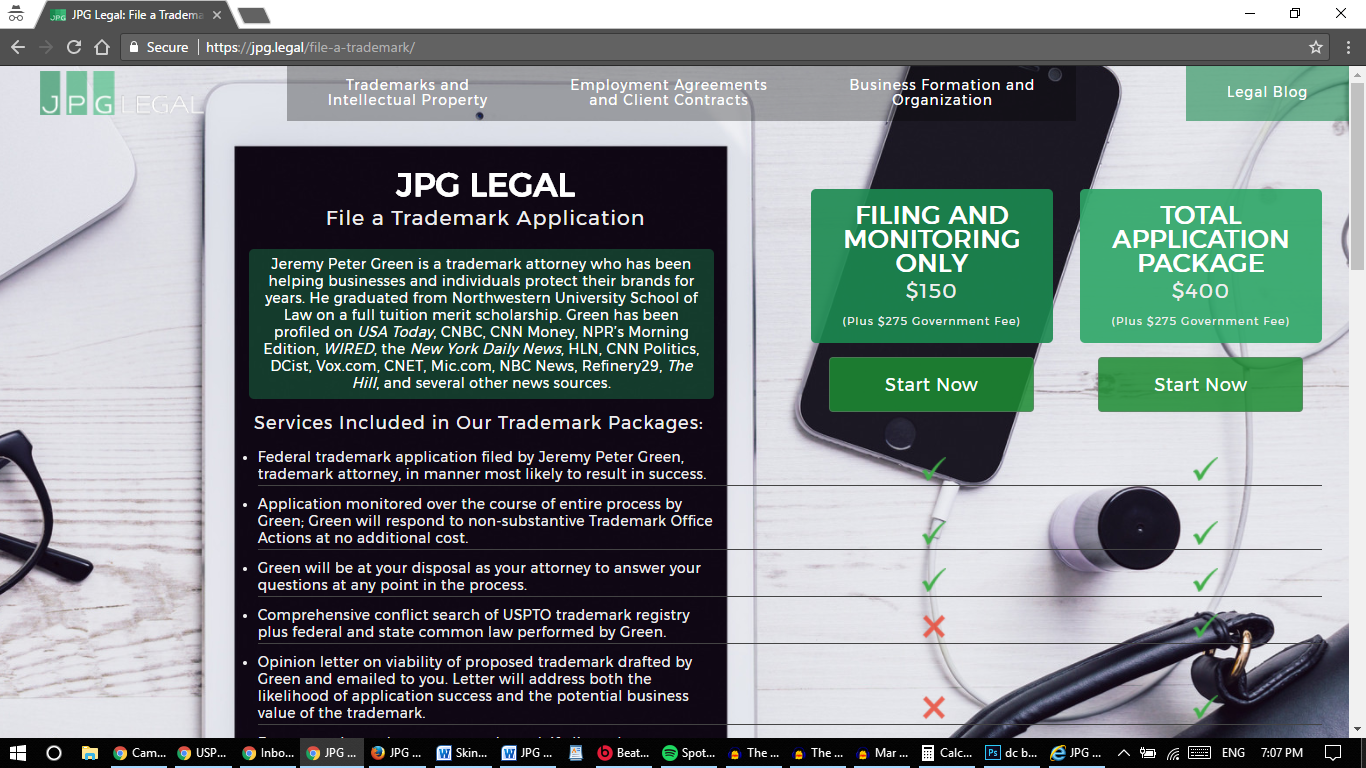 After four months at this job, while still working nights and weekends for a few local trademark clients, I managed to save up $5000. With this bankroll, I was ready to launch my Google AdWords campaign. I quickly finished building out the functionality of my website forms and I started an ad campaign in April of 2017. I was right to wait until I had saved up $5000, because I blew through almost my entire bankroll before I actually hit on a profitable ad campaign formula in May. That month or so during which I was burning through my savings and tinkering with my ads was stressful, but also a lot of fun. After that initial month, I was getting so much business that it was clear that I was going to have to transition out of my role as in-house counsel at Teamsters 922. 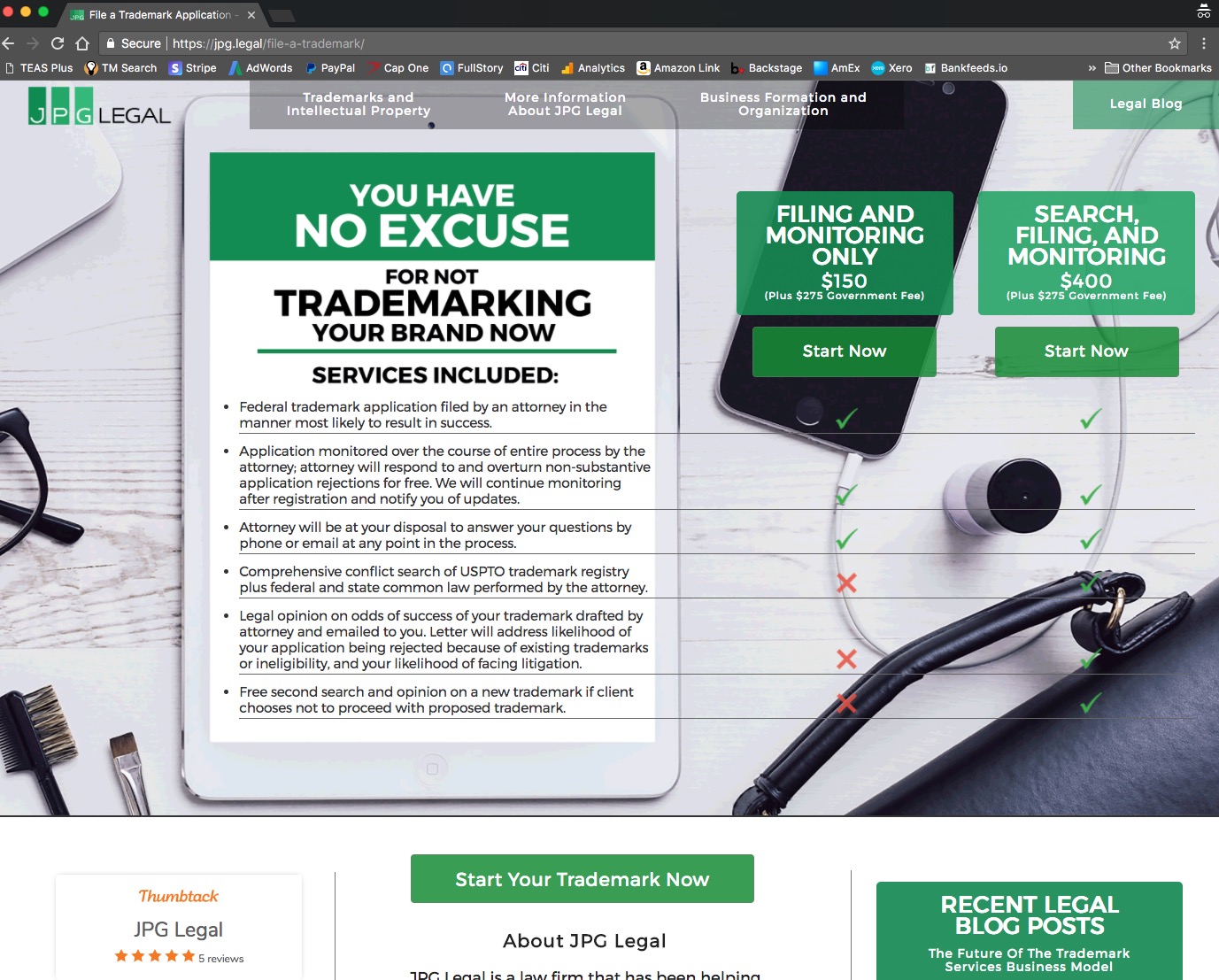 At some point I decided my landing page still looked awkward, so I came up with the “You Have No Excuse” slogan, designed some branding for it in Photoshop, and filed a trademark application for it. I also incorporated it into the slideshow on the enormous display monitor

I run with an RKM Android mini-computer

in my strategically located office at the WeWork Apollo here in Northeast Washington, DC. 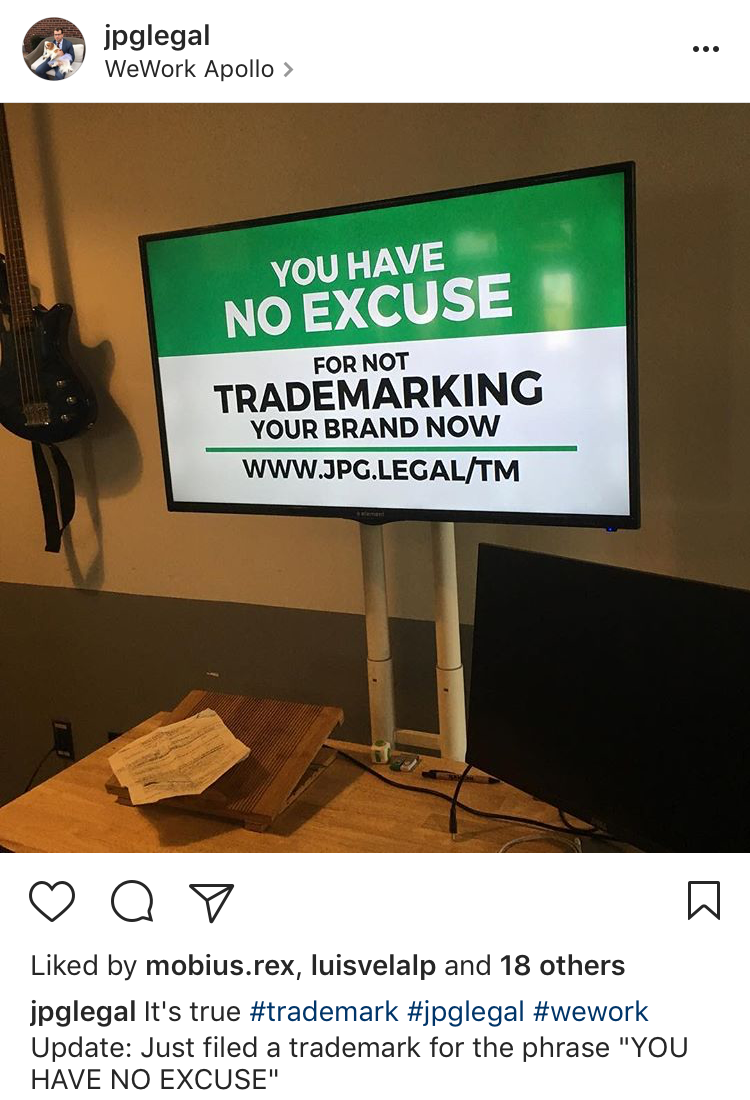 An Instagram photo from earlier this year of the large monitor

I keep behind my office’s second desk displaying my branding to passersby.

And there you have it! I’ve filed over 225 trademark applications so far. I never could have imagined that my firm would be taking off so quickly. Dreamed, maybe, but not imagined.

Click Here to Learn More About Our
Trademark Registration Packages.

Back To Ask A Jewish Lawyer